Sean Harris is Berean’s fourth pastor in its 50 plus years of existence. Berean called Sean to be the Senior Pastor in March of 2006. His responsibilities include preaching and teaching the Word of God, casting the vision for the ministry, the leadership of staff and faculty members, administration of Berean Baptist Academy, communication with church members, and personal discipleship. Sean preaches during the worship services on Sunday mornings and evenings, teaches the church’s pre-membership class, and teaches freshmen Bible at the Academy.  He also provides audio commentaries on newsworthy items throughout the week for sermonaudio.com. 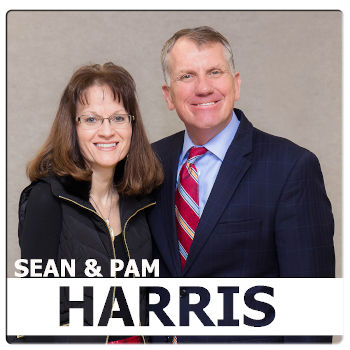 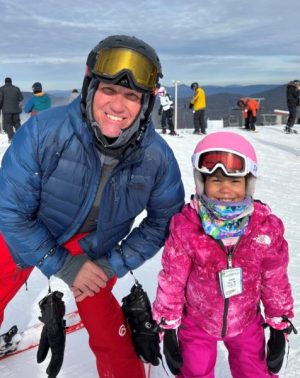 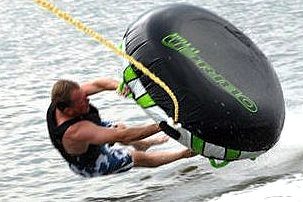 In 1988, Pastor met his wife, Pamela, at Berean, and after a year of courting, they were married by Pastor Byrd in what is now the chapel. Pam worked as a teacher, and Sean was a paratrooper and forward observer during these early years of their life. In 1994, God blessed them with a son, Austin. Pastor Sean and Miss Pam have one granddaughter–Autumn Renee.

Pamela has been as much a part of Berean as Pastor has. She taught first grade in the Academy for six years and presently works as a teacher’s aide. 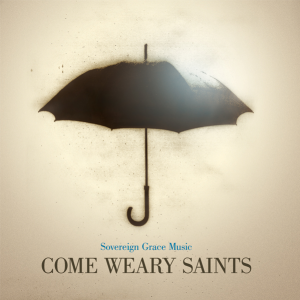 Pastor completed his Bachelor of Arts Degree with Thomas Edison State College and a Master’s of Divinity with a concentration in “Leadership” from Liberty Baptist Theological Seminary.

Pastor Sean graduated from the US Army Sergeant’s Major Academy (Class #55), Ranger School, Jumpmaster School, and numerous other courses relating to his specialty. He has deployed to combat four times with the 82nd Airborne Division, including a combat jump into Panama in 1989. It was during his most recent deployment in Iraq that he believes God made it absolutely clear that he should retire at the earliest opportunity and enter the pastorate. His complete Army bio is available above as a pdf download. 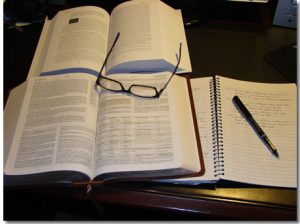 For Ezra had prepared his heart to seek the law of the LORD, and to do it, and to teach in Israel statutes and judgments. (Ezra 7:10)

“‘Rash preaching,’ said Rowland Hill, ‘disgusts; timid preaching leaves poor souls fast asleep; bold preaching is the only preaching that is owned of God.’ ” If Pastor’s preaching can be categorized with any one word, “bold” would be that word. And his boldness comes not from his self-confidence. It comes rather from his belief that consistent, expository preaching of the whole of Scripture will be used by the Spirit to draw people to the Son. And when people are drawn to the Son, they are saved, sanctified, and they become disciples and teachers themselves. Pastor takes you through the chapters of God’s Word. You will learn the passage’s historical intent, literal interpretation, and twenty-first century application. He strives to teach God’s Word accurately and clearly, and he strives to preach God’s Word boldly. 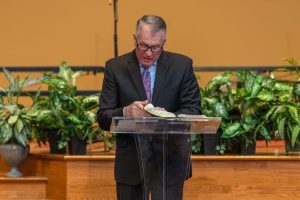 When were you saved?   It was on a Monday or Tuesday night and I was nine or ten years old. Dad and I were attending a revival meeting at another church in Lindside, West Virginia. I seem to recall it was a Baptist or Pentecostal church, but I am not sure. Like most churches in WV, I recall it was on the side of a hill. It was a small church, with hard wood pews, in two rows, and I remember there was a wood burning stove on the left front side of the church right in the main room. The evangelist was preaching on hell and I recall not wanting to go to hell. I have no recollection of what I said, whether I prayed or not, or just what happened. I just know that I responded to the invitation that night. The preacher dealt with me and my life has not been the same since. Shortly, thereafter I was baptized in a creek about a ½ mile from the church where my father was converted. I was baptized again, as an adult, to gain membership in a strict Baptist church in Lawton, OK, but neither baptisms have any bearing on my salvation.

Pastor Sean grew up in a blended family first in Massachusetts and then in the hills of West Virginia with three brothers and a sister. It was in a tiny town in West Virginia that Sean saw his father acknowledge the truth that Jesus is the Christ. While living in a house with no running water and a wood burning stove for heat and cooking, Sean’s family began attending a charismatic Baptist church, and it was in this church that a son saw his father converted. The conversion was instantaneous and had a tremendous impact on the entire family. The father’s conversion led to the son’s conversion, and Sean was baptized in a creek in Lindside, West Virginia just across the way from the church. Later his father attended Great Lakes Bible College in Lansing, Michigan and pastored several churches in Michigan, West Virginia and Virginia until God took him home. Seeing his father come to Jesus had a profound impact in Sean’s confidence in the power of the gospel to radically change lives. Unfortunately, Pastor also personally witnessed impact of divorce. And then later the impact liberal theology had on his father’s life, and this has deeply impacted his desire to fight for the faith once delivered for tomorrow’s generation.