Are you one with us in our Missions Philosophy?

Do you consider yourself “in the market” for solid partner churches?  Would we agree?  Let’s see! Read this while listening here and let’s discover whether God may have put us together for such a time as this.

Aaron and Jillian Bashore had a very active ministry in North Africa for many years where they were able to share the gospel throughout the Muslim population in person, across the radio and through Arabic publications.  Due to a variety of reasons they were forced to move out of that country but God brought them instead to Frankfurt, Germany, an extremely culturally diverse city (53% of Frankfurt has an immigrant background).  The Muslim population in Frankfurt is continuing to grow at a tremendous rate.  It is not uncommon for their weekly church services to have people from 15 or more different cultures.   At this year’s Easter Sunday services they started the service with the greeting ‘Christ is risen!  He is risen indeed!”.  But the greeting was not just in German, as would be their normal service language.  They also shared the greeting in Chinese, Arabic, French, Portuguese, Spanish, Dutch, Romanian and English!

Not only have the Bashores planted a church in Frankfurt, located near the Goethe Institute, where they can reach the vast student population, they are also supporting a struggling local German congregation in the areas of biblical discipleship, gospel community and effective evangelism.  And they continue to support the churches and the radio station they planted in North Africa.  In 2020 they announced that over 1.3 million local Muslims had listened to their radio station. Although a member of the local state “internet security” threatened to shut their page down, as of now their foreign-based server has held up and remains.

The Bashore family (Aaron, Jillian, Noah, Josie and Jenna) is sponsored by the Berean Bible class 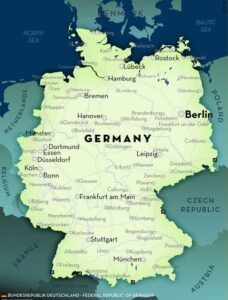 In Aug. 1985 the Branches entered Mexico. They finished language school in 1986 & immediately started preaching in Spanish. In 1987 they started Las Torres Bapt. Ch. in Monterey, and have since planted 3 other churches while starting a radio ministry and a Christian school. They provide mentorship to the current pastors and are now in semi-retirement in the states. BBC is their sending church. Visit their website www.iblastorres.org.

The Branches are sponsored by the Growing in Christ and Sandra Byrd Ladies SS Classes.

Luke and Jessica consider it a privilege to work as church planters with an emphasis in deaf ministries. Their goal is to evangelize the lost, counsel, disciple, train Bolivians in God’s Word, and plant churches all for the glory of God.

The Marie family is sponsored by the Making Disciples SS Class.

Javier Perez became the pastor of Iglesia Biblica Evangelica (Evangelical Bible Church) in Sabadell, Spain in March 2018.  An intercultural and international church, IBE has Americans, Chileans, Argentines, Ecuadorians, Bolivians, Hondurans and others, in addition to Spanish and Portuguese. They see the hand of the Lord in everything and hope not only to be a blessing to the city of Sabadell but to the entire region of Vallés, being, with the help of God, a mother church for other church plantings in the future.

The Perez family is sponsored by the Foundations SS Class.

Berean began supporting Rom and Rachel in 2008. Rom is a seasoned missionary pastor and is presently working on his sixth church plant in Brazil. His primary website, www.tbm.org.br, is in Portuguese but the translation tools in Google make it easy to read. You can also visit the website of their mission board to keep up to date with their progress.

The Ribieros are sponsored by the Chapel SS Class.

The Republic of Malta is an archipelago of Mediterranean Islands, strategically located between Southern Europe and North Africa. As a result of it’s location, Malta has been conquered by many different civilizations through the years. Each conqueror left remnants of their civilization which makes Malta a cultural melting pot in many different ways.  Malta has the highest population density of any area in the European Union with over 4,000 people per square mile.  But the population is of 98% Catholic.

Luke and Anna Tanis hope to move to Malta in the end of 2021 as they finish their deputation and fund-raising.  Together with their young children, Theo and Layla, they will be joining two other missionary families who already live and work in the country to learn the culture and help with church planting and gospel preaching. The official language of Malta is English so they will not need to spend time in language training as so many missionaries need to do!

Click here for the Tanis Family’s most recent newsletter

The Tanis family is sponsored by the Carolina Christians SS Class.

Pastor Yamazaki is committed to church planting and leading a Christian school in Japan. Yamazaki has planted Toyohashi Grace Baptist Church and is preparing to transition and begin a new work in the area. Visit their ministries (the bottom two sites can be read by “right clicking” on the page and “translating to English” in most browsers): Toyohashi Grace Baptist church (English site) http://bcjapan.com/english.html

They are sponsored by the Crown SS Class.